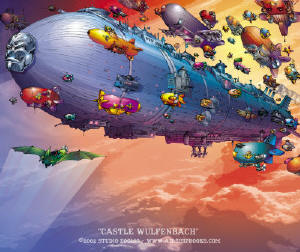 The only way to travel: by airship castle.
"[Airships] put me in mind of a man who invents a floor that is perfectly smooth, beautifully patterned, never requires cleaning, and never wears out. Unfortunately, the floor cannot be walked upon with nailed shoes or have anything dropped on it, because it's made of high explosive."
— Adolf Hitler
Advertisement:

While airships in general are considered cool, the Cool Airship is beyond cool. Most of the time, it will have an impossibly cool design which would most likely be unable to fly in Real Life. Fortunately, fiction has Phlebotinum and/or hybrid designs (heavier-than-air airships that fly with some level of aerodynamic assistance from lifting bodies, wings, rotors, etc.) for that little problem. Cool Airships also tend to be exceptionally big, sometimes so big that they double as Airborne Aircraft Carriers or even airborne cities.

The Cool Airship is the preferred method of travel for Sky Pirates and technologically-savvy Nazis,note In reality, the Nazis weren't all that big on airships, seeing them mostly as propaganda tools and is extremely common in classic scientific romances and Steampunk. Technically, airships are far more Diesel Punk, with regards to both style and overall use, but they were actually invented in the Victorian era. The first airship flew in 1852 and was propelled by, you guessed it, a steam engine. Yes, that means blimps were around before the radio, On the Origin of Species, and the Lincoln administration.

It's worth noting that not all airships are Cool Airships. For instance, the Goodyear Blimp is definitely not a Cool Airship. Like the Cool Car and the Cool Plane, the Cool Airship is exceptionally cool. Furthermore, it has to be owned by a major character, or otherwise play a prominent role, such as acting as the setting for a major scene. For massive cool points, it should be appointed like Titanic, with a casino, bar, and a sultry chanteuse on board for the entertainment of the passengers. Military or pirate vessels are known to carry an internal aircraft hangar and lots o' guns. Either way, any Cool Airship worth its salt usually boasts an Unnecessarily Large Interior. This is actually justified, in Real Life large airships need the vast hull space for weight distribution. It goes without saying that they are usually commanded by a badass of some sort.

Unfortunately, with most of the world's militaries largely giving up on the vehicle type after a series of deadly crashes and especially after the fiery public destruction of the Hindenburg in 1937, airships were almost phased out in Real Life, so there are few examples in that category, with most modern airships being used for advertising, tourism and surveillance. See our Useful Notes on airships for more information on these craft and their history. Today, it's unlikely that they'll ever make a big comeback and overtake other aircraft, since modern jets are 4-5 times faster and helicopters are more nimble. Then again, even in their heyday airships were never common, seen more as the pinnacle or the titan of aircraft, something rare and newsworthy. However, there is a budding renaissance of Cool Airships being built and tested for niche applications, for example replacing cargo helicopters at ten times the range and a tenth the cost.

This is largely fueled by the new development of hybrid(heavier-than-air) airship technology, which gives them much higher payloads, greater speed and more resistance to foul weather. Some other good examples of hybrid airships would be the LEMV

See Zeppelins from Another World for airships being used to help show the viewers that something is set in an Alternate Universe or Alternate History. The two can overlap, but Zeppelins from Another World are often just a background detail, and Cool Airships (including ones in Speculative Fiction) aren't always used to hint at an Alternate Universe setting. After all, some exist in Real Life.

In fantasy or Steampunk settings, the word "airship" will often be used for aircraft that are not airships in the real-life definition of the word. They may look like actual flying ships, or otherwise have no visible means of staying in the air, save for perhaps some tiny propellers or slowly flapping wings. Usually these use some sort of vague Applied Phlebotinum to lift off the ground, if it's even explained at all. Conversely, Science Fiction settings can invoke the trope with spaceships flying in the atmosphere.

A Sub-Trope of Cool Ship, and so a Sister Trope of Cool Boat and Cool Plane. Related to the Square-Cube Law, Hollywood Density and Balloonacy. If it's a Living Ship, it's probably also a Living Gasbag. If the airship isn't just cool, but also ominous and threatening, that's Dread Zeppelin.

And remember... IT IS NOT A BLIMP, IT'S AN AIRSHIP!