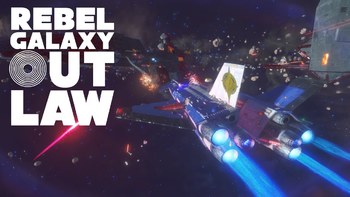 Crank the volume, chamber another round, and burn like hell...

Rebel Galaxy Outlaw is an action space-exploration game that is slated for release on PC (via the Epic Games Store), Playstation 4, and Nintendo Switch in 2019, with a Steam and GOG.com release to follow in 2020.

Taking place 34 years before the original Rebel Galaxy, Outlaw places players in the role of Juno Markev, a former outlaw and smuggler trying to go straight when she is pulled back into the criminal element following her husband's murder. As she starts hunting for the killer, she finds herself in debt and forced to use a ramshackle space vessel after her ship is totaled. Now, Juno must do whatever it takes to avenge her husband and get back onto the straight and narrow.