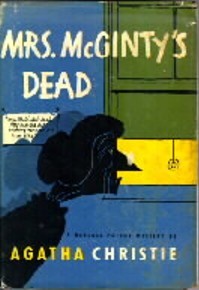 Mrs McGinty's Dead is a 1952 mystery novel by Agatha Christie.

Hercule Poirot decides to take on the murder case of an old charwoman, Mrs McGinty, as a favor to his friend Superintendent Spence, who is not convinced that the person accused, James Bentley, is guilty of the crime.

Poirot decides to investigate in the village of Broadhinny, where Mrs McGinty and James Bentley lived, and in doing so, he stumbles across an old newspaper. Said newspaper contains photos of four people with criminal pasts, and these photos may prove instrumental in solving the crime...