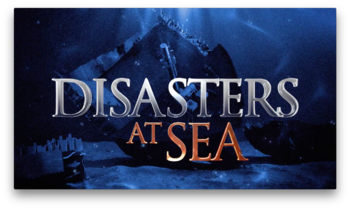 Disasters at Sea is a Canadian documentary series that first aired in 2018, centering around real-life shipping disasters. Each episode begins with a reenactment of the disaster, then of the investigation into it, and ending with an explanation of safety measures meant to prevent these disasters from repeating.

Disasters at Sea contains examples of: