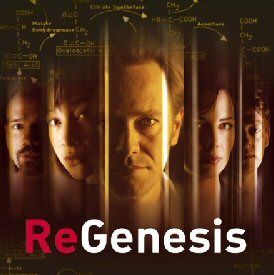 "Science has made us gods, even before we are worthy of being men."
-Jean Rostand, series epigram
Advertisement:

Canadian television series (2004-2008) revolving around the scientists and administrators of NorBAC (North American Biotechnology Advisory Commission), a Toronto-based organization that is tasked with investigating both ethical issues involving nascent technology (genetically modified foods, designer babies) and threats to the Americas posed by pandemics, super-viruses, bioterrorism, and global climate change. The team is led by David Sandström, a boozing, womanizing, arrogant Jerkass who just happens to be the best molecular biologist in the world. Known for its extremely realistic approach to modern science and technology: most of the science shown is either real or in the "feasible-but-difficult" development stage.

Not to be confused with the novel of the same name by C. J. Cherryh.