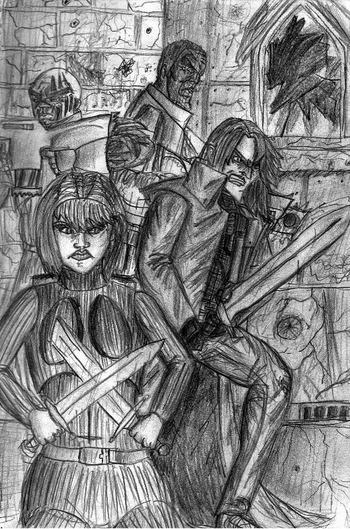 going clockwise from left to right: Jeurat Garrakson, Marcel Torris, Attelus Kaltos and Elandria. Being badasses.
"I will tell you everything soon, I swear I will, but I will say this. This is reality. This is the era we live in. There is only war, Adelana. There may not have been war on Omnartus, nor most worlds in the Calixis sector. But it is always somewhere. It has found you, I'm sorry to say. As it had found me. As it has found countless upon count of others. Trillions before us and trillions of more to come."
— Attelus Kaltos

A Warhammer 40,000 fan fiction from the perspective of a young assassin apprentice "Secret War" has drawn inspiration from many sources but the most prolific being the Ravenor series by Dan Abnett.

After his mercenary organization is hired by a rogue trader to hunt down a highly influential gang leader on the Hive world of Omnartus, Attelus Kaltos is embroiled even deeper into the complex and convoluted world of the hired killer.

Soon he finds that not all is what it seems and that his enemies and allies are not at all what he believed them to be. That this is the mission which will truly test him mentally and physically and change him, for the better or for the worst, forever more.

"Secret War" is finally finished and is Here

The sequel has began and a work in progress and is here: Secret War: Upon Blood Sands.