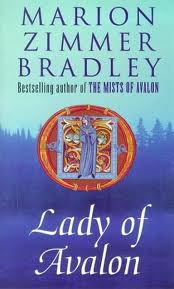 There are places where the worlds lie close together as folds in a blanket. One such bridge is the place that men call Avalon.

), Lady of Avalon (1997) cannot be treated as one part in the internal chronology, as it has three parts, of which only two take place before Priestess of Avalon. However, according to

Word of God, all parts have, in a sense, the same main character, who reincarnates and learns new things in every life. Every time she becomes another Lady of Avalon: in the first part she is Caillean, who made the decision about veiling the island with mists, then she is reborn as Dierna, a cunning politician and efficient leader, to eventually return as strong-willed Viviane, first guardian of the Holy Grail. The book reveals important parts of the history of Avalon, its origin and its connection with both first Christians and the Fair Folk. The last part is a direct prequel to The Mists of Avalon and substantiates many decisions made by Viviane in the latter book.