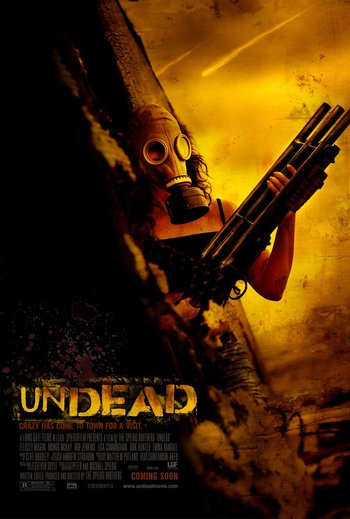 Crazy has come to town for a visit.
Advertisement:

Undead is a 2003 Australian zombie Horror Comedy, written and directed by The Spierig Brothers. The film is a love letter to low budget zombie and sci-fi B-movies, and launched the brothers' careers as Hollywood film-makers.

In the sleepy country fishing town of Berkeley, the arrival of a strange meteor shower leads to the outbreak of a virus that turns the townspeople into vicious zombies. A small group of survivors, including a local beauty queen who was trying to leave town prior to the outbreak, a slightly-crazy gun nut who believes that the survivors are “Chosen Ones” destined to fight for humanity, a pair of local police officers, and an expecting couple, are forced to work together to survive – not just against the zombie hordes, but also against an enemy of extraterrestrial origin...

Not to be confused with the 1957 Roger Corman film The Undead.