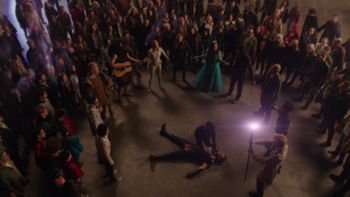 Even death is no match for The Power of Love.
Advertisement:
open/close all folders

Episode 1: The Virgin Gary
Episode 6: Tender Is The Nate
Episode 11: Seance and Sensibility
Episode 12: The Eggplant, the Witch and the Wardrobe
Episode 14: Nip/Stuck
Episode 16: Hey, World!