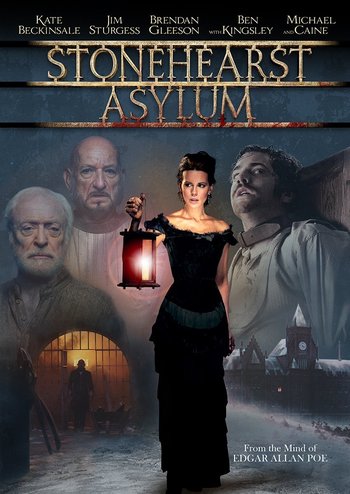 A 2014 film starring Jim Sturgess, Kate Beckinsale, Ben Kingsley and Michael Caine, based on the short story The System of Doctor Tarr and Professor Fether by Edgar Allan Poe.
Advertisement:

In 1899, young Dr. Edward Newgate arrives at the remote Stonehearst Asylum to join its staff. He is surprised to learn that the asylum's superintendent, Dr. Silas Lamb, rejects the common methods of his time. The patients are free to move around the grounds rather than be drugged and imprisoned, even having their delusions encouraged when Lamb thinks this will make them happy. All is not as it seems at the asylum however, as Newgate soon makes a shocking discovery...