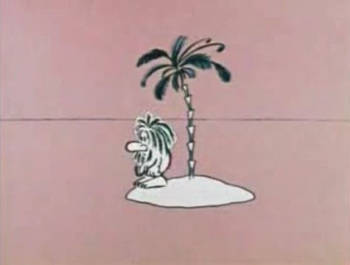 A man sits on a lonely desert island—an absurdly tiny island, so small that there's barely room for him to sit. (Let's not think about the lack of fresh water.) At first, the ships that pass by simply fail to notice his frantic waves. Eventually, however, they do notice him, and he receives a parade of visitors: anthropologists, tourists, colonizers, missionaries, and more. All of them notice him, many of them exploit him or his island, but none of them bother to help him.