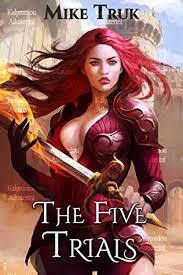 The series in a nutshell: cleavage and Cool Swords.
Advertisement:

Noah Kilmartin is no hero. He's so unheroic that he's been pining for his childhood friend Emma all his life, and when he finally works up the nerve to tell her about it it's just as she's about to get on the bus to leave town forever, and she pityingly rejects him.

And then things get weird. Some sort of vessel crashes into the bus stop, Emma is knocked unconscious, and a wolf-monster appears and attacks them. Noah picks up a sword from inside the craft and, more by luck than skill, manages to kill the creature. And then there's a flash of light and he's suddenly standing in a hall full of people wearing weird clothing and telling him that he's the universe's last hope against the evil goddess Lilith.

Now he has to pass five grueling tests to prove his worth, as well as choose five women to serve as his lovers and companions on a quest down through the Tree of Life to defeat Lilith and save the cosmos. Noah is certain that he can't do it — and it doesn't help that everyone around him, including Emma, seem to agree.

Tsun-Tsun TzimTzum is a series of novels by Mike Truk. Of the two parts of the title, "tsun-tsun" is a character type common in Harem Anime, while tzimtzum is a concept from Kabbalah, making the two main inspirations for the story very clear (once you google one or both of the terms, that is). Four books have been published so far: