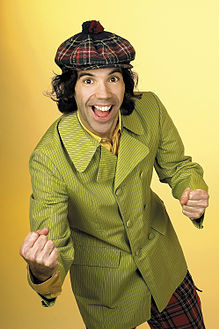 Nardwuar, in one of his more subdued moments.
Keep on rockin' in the free world, and doot doola doot doo...
— Nardwuar ending a typical interview
Advertisement:

John Ruskin (b. July 5, 1968), better known as Nardwuar the Human Serviette — usually just Nardwuar for short (rhymes with "card bar") — is a media personality and musician from Vancouver, Canada most well-known for his unique celebrity interviews.

When it comes to Nardwuar, viewers and interviewees alike may only see his bizarre fashion sense, high-pitched voice and overcaffeinated, childlike personality upon first glance. However, that eccentric exterior is complemented by an incomparable dedication to his craft, as he routinely showers his subjects with gifts and obscure factoids relating to their own lives and careers (especially ones that specifically relate to Canada or Vancouver), more often than not leaving them completely baffled/flattered/humbled (and maybe a little disturbed) that he's gone to such effort.

As seen in the page image, Nardwuar has a particularly eccentric Iconic Outfit. For one, Nardwuar is almost always seen wearing a tam o' shanter (sort of like a tartan-patterned Scottish beret, with a pom-pom on top). In his early days he often wore a toque (the Canadian term for what Americans call a "beanie") until his was stolen by an angry Sebastian Bach. He doesn't normally wear a hat while playing live in concert, however, because it tends to fall off. The hat is generally accompanied by matching plaid pants and a suit jacket. Rarely does he deviate from this look, but he'll dress more conventionally if the circumstances call for it. One such instance is November 1997, where he snuck into the audience at an APEC conference to ask his now-infamous question about mace,

Nardwuar also sings lead and plays the electric organ with the bands The Evaporators and Thee Goblins, runs a record label, and has hosted a weekly radio show

on Vancouver community radio since 1987. He's released two DVD compilations so far of his interviews: Doot Doola Doot Doo... Doot Doo! (2006) and Welcome to My Castle (2007), the latter being a compilation of two low-budget specials he made in 1993 for local TV.

And it's important to note: Nardwuar isn't a character that John Ruskin plays. As anyone who knows him personally can attest, though he does become more animated and enthusiastic when he's on mic, his personality is not an act.

"This is TV Tropes! We have to know!"