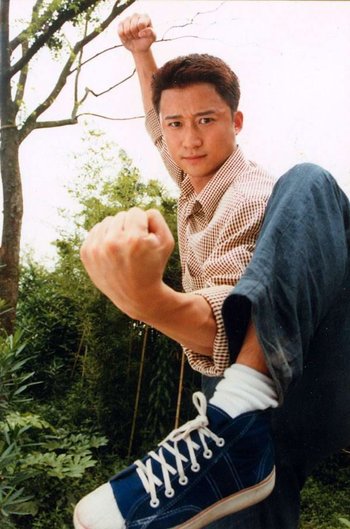 "See this? This is my ass-kicking face."
"I wanted to show the world that Chinese people are tough."
Wu Jing on why he conceived the Wolf Warriors film series.
Advertisement:

Wu is an accomplished martial artist and started his career in his teens, with his first starring role being the protagonist of Tai Chi Boxer (1996). Ever since his career in acting took off, Wu had starred - and fought - Yuen Biao, Sammo Hung, Donnie Yen, Nicholas Tse, Andy Lau and various prominent megastars of Hong Kong. While Wu had plenty of film roles in the early 2000s, his Star-Making Role as the ruthless assassin, Jack in Sha Po Lang made him typecast as villains and killers later on in his career.

Tropes Associated with this Performer