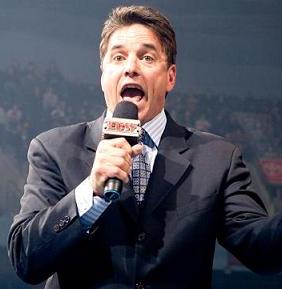 The voice of the WEBALSD.
"Uno, dos, adiós!"
Advertisement:

Michael David "Mike" Adamle (born October 10, 1949) is a sports personality and former National Football League player. He is best known as the co-host of American Gladiators for seven years and as arguably one of the worst greatest wrestling personalities in the history of the WWE.

On January 27, 2008 at the Royal Rumble, Adamle began working as an interviewer for World Wrestling Entertainment (WWE), making multiple mistakes with every onscreen appearance. On his debut, he referred to Jeff Hardy as "Jeff Harvey" and still managed to become the play-by-play commentator on ECW. He was well known - and mocked (by his color partners Tazz and later Jerry Lawler, former ECW owner and booker Paul Heyman, and former talent Lance Storm, among MANY others) - for being unable to keep up with the commentary, using terribly unfunny Catch Phrases, and generally being a poor substitute for Joey Styles.

On the July 28, 2008 episode of RAW, Executive Vice President Shane McMahon announced that Adamle was the new General Manager for the Raw brand. Even though his new character allowed him to carry a script on camera, he still made mistakes in every episode. In November, during an in-ring segment with Shane McMahon and Randy Orton, Adamle resigned from his position as General Manager, but no reason was ever given for Adamle's real life departure. (However, it was lampshaded on one episode of RAW that the other wrestlers - particularly Chris Jericho - couldn't stand him.) Later that year, he moved to WMAQ, NBC's owned-and-operated affiliate in Chicago, to become a sports anchor, where he stayed until retiring in 2017.