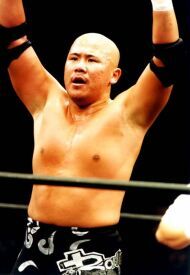 Takahiro Suwa (b. 1975) is a retired Japanese Professional Wrestler, better known by his ring name SUWA. He entered professional wrestling in Último Dragón's puroresu/lucha libre Toryumon circuit, where he graduated in the very first class along with future allies and enemies. After some months, he joined two of those to form Crazy MAX, a group of punks and thugs who became the first and most mythical villains of the promotion. Under the leadership of CIMA, the companionship of Don Fujii and the management of new member TARU, SUWA presented himself as an unpredictable psycho who lent style and heart to the group and acted as its second in command. Through many years they ravaged Toryumon, fighting other gangs like Masaaki Mochizuki's M2K and Magnum TOKYO's Do FIXER, and SUWA in particular won every individual title in the company. This success only stopped when their mark broke away from Último Dragón in 2004 and became Dragon Gate, a new promotion with a Lighter and Softer outlook towards professional wrestling. This drove SUWA to leave in disenchantment, only keeping ties with the similarly departing TARU, and join Pro Wrestling NOAH after a time in the search of greener pastures. SUWA remained as a heel mainstay of NOAH until his retirement in 2007, and he still did a brief return in 2013 before having to retire again.