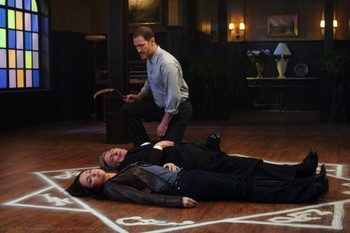 Moon's in the right spot. The board is set. Let's get started, shall we?
Pamela: I know what you did to that demon, Sam. I can feel what's inside of you. If you think you have good intentions, think again.

Sam and Dean need the help of Pamela Barnes to break the veil, defend one of the 66 seals, and protect the Reapers.

Sam and Dean investigate and discover that the local Reaper is missing. They figure out that killing two Reapers is one of the 66 seals, and get Pamela—the blind seer—to turn them into ghosts, so they can try warn the Reapers and stop them being killed.

As ghosts, they meet Cole Griffith, a kid who was meant to be taken by the Reaper but got left behind when it was kidnapped. He teaches them how to fight and disappear in a quick training montage.

Finally the boys track down the demons. It was Alastair, and he manages to kill one of the Reapers, but the boys save Tessa.

In the real world, Pamela gets attacked by a demon, who stabs her. She manages to bring Sam back, and he deals with the demon. Pamela can't die yet, however, because Tessa still isn't reaping.

Castiel appears to Dean, and tells him they finally had a victory. Cole moves on to the afterlife, and because Tessa is reaping again, Pam just has time to bring Dean back before she dies.