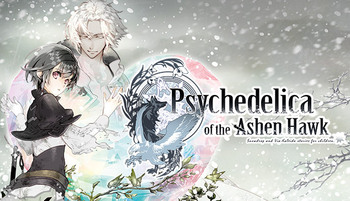 Just outside of a town ruled by opposing clans and locked in perpetual winter, a teenager lives in a mysterious tower under the care of a man known only as Ashen Hawk. Born with a cursed red eye marking her as a witch, she hides her identity and lives as a boy to avoid persecution from the deeply superstitious townsfolk who believe the eternal winter they live in is the mark of a witch’s curse.

However, one day a mysterious relic held sacred by the town is stolen, and a series of shocking revelations about the town’s past threaten to shake apart the foundations of everything she knows and holds dear. Just what happened to the town to lock it in a never-ending winter? And does she even want to know the truth behind the witch’s curse?

Psychedelica of the Ashen Hawk is an otome Visual Novel video game developed by Otomate. It was published for Play Station Vita by Idea Factory in Japan in 2016, and by Aksys Games in North America and Europe in 2018. It was later ported to PC by Intragames and Idea Factory released in 2019 via Steam.

This is the second game in the Psychedelica series, wuth the first one being Psychedelica Of The Black Butterfly. While not a direct sequel, it is set in the same universe and contains a lot of references and nods to the first game — although it is not necessary to play the original game to understand Ashen Hawk.

Tropes found in this game are: