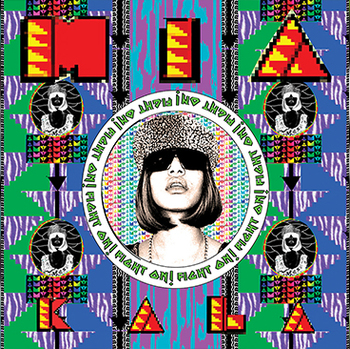 I don't read, yeah, I just guess / As the world turns / Don't bother me with your mess
Hands up
Guns out
'Represent the world town
—"World Town"
Advertisement:

Kala is the second studio album by M.I.A.. Released in 2007, it may be her best thus far, thanks to its widespread acclaim from mainstream critics. The album broke from her underground roots due to the groundbreaking success of the single "Paper Planes", which received heavy airplay and peaked in the top ten in the US. The album straddled many influences from different genres such as Alternative Dance, Funk, Alternative Indie, Punk Rock, Hip-Hop, and World Music.

The album was named after her mother, similar to how her last album, Arular, took after her father's name. The lyrical themes mainly revolve around feminism, diversity, poverty, and sexuality, which mirror MIA's mother's life since her mother was a refugee from the third world and struggled to support the family.

It allowed its featured artists, such as Afrikan Boy and the Wilcannia Mob, to break into the mainstream. MIA thus gave a voice for numerous underprivileged foreign artists who are relegated to the underground, and the record still remains widely influential due to the Genre-Busting conceits of its singles, "Boyz", "Jimmy", and of course, "Paper Planes".