Film / Manila in the Claws of Light 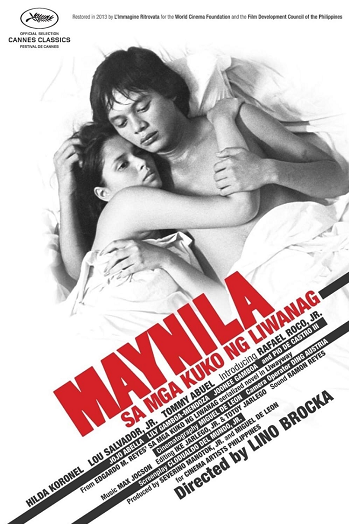 "You know, in India, there are people who walk on burning coals, yet they feel no pain. They're called fakirs. Think you can do that? Think you can put out that cigarette on your palm?"
— Pol
Advertisement:

Manila in the Claws of Light (Maynila, sa mga Kuko ng Liwanag in Tagalog) is a 1975 drama film by Lino Brocka. It is an adaptation of the novel In the Claws of Brightness by Edgardo M. Reyes.

Like much of Brocka's filmography, the movie is set in the "then-present day", in this case The '70s when the country was under a martial law dictatorship. Its protagonist is Julio Madiaga (Rafael "Bembol" Roco Jr.), a hardworking everyman from the rural island province of Marinduque. He had travelled to Manila to search for his girlfriend, the beautiful Ligaya Paraiso (Hilda Koronel), who disappeared after supposedly being recruited to study and work in the city. Julio takes up a job at a construction site to support himself, but witnesses abuses by the men in charge while crime and prostitution run rampant around him. When he finally gets a lead on Ligaya's whereabouts, it leads him to some horrific truths.

The film was digitally restored in 2013. A stage adaption of the film was released in 2017.