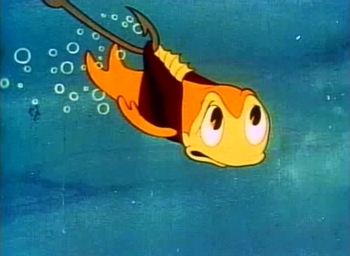 Education Fish is a 1937 short film (eight minutes) by Max and Dave Fleischer.

Tommy Cod is a rebellious young fish who doesn't like going to school. The teacher at the fish school (school of fish!) presents a lesson on the dangers of "playing hooky"—that is, getting too close to a fisherman's hook—but Tommy plays pinball in his desk rather than pay attention. When he escalates from goofing off to disrupting the class, the teacher locks him in a side closet for detention. Unfortunately there's a window, which Tommy swims right out of. He then encounters a worm on a hook.

Part of the Color Classics series.