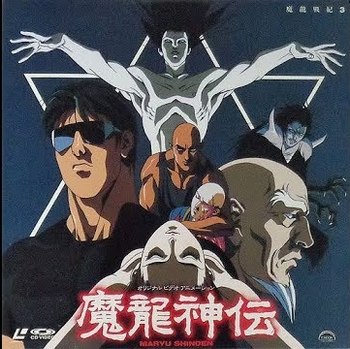 The battle begins.
Maryuu Senki is a three episode OVA series from The '80s. It was an original work directed by Hiroaki Okami. The first episode was released in 1987 and produced by AIC, but the other two were made by Bandai Visual and would have to wait until 1989 due to production troubles. Part of the script was penned by Sho Aikawa, who went uncredited due to his plans for the third episode being abandoned.
Advertisement:

In the times of empress Himiko, the kido shamans who ruled Japan from the shadows were killed by fear of their power. However, those who survived hid through the centuries, hoping to recover power in the nation through a mystic ritual to summon the Four Holy Beasts in human bodies. Their plan was stopped in The '70s when one of the beasts turned on their leader and sent away the soul of other two. Or was it?

18 years later, the tranquil life of young and manly Japanese artist Kyoichi Hiyu in Tokyo is shattered with the arrival of demonic ninja cultists, the old drunk monk Gendo and a sinister young gentleman named Miki Chiyoe. He soon will learn all of them and his girlfriend Shiho are all involved in a perverse plot to continue the ancient shamans’ plan, and will have to discover his true identity in order to avoid the catastrophe.

The work remains a pretty unknown horror OVA from The '80s, but it was a personal favorite of dark anime pioneer Yoshiaki Kawajiri, who praised its first episode's art highly and requested its animator Naoyuki Onda to work with him in Demon City Shinjuku.