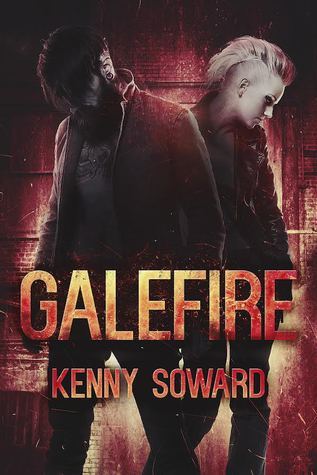 Lonnie has had better days.

Galefire is a Urban Fantasy novel by Kenny Soward, author of Gnome Saga.

Lonnie is just your average runner for the infamous Eighth Street Gang when he gets an urgent phone call to back up his crew after trouble follows them home from a drug deal gone bad.

During the ensuing firefight, Lonnie sees some things he wishes he hadn’t, including the gang’s leader, Selix, channeling her powers from a place called the Fade by getting high…and dancing. Memories begin unraveling inside Lonnie’s darkened mind. Memories of dragons and fiends and fire-swept otherworlds. Memories Selix controls with a simple touch. But what is real and what is not?

In the strange and violent world of Galefire, Lonnie comes to realize not everything is as it seems, including his own identity. But will Lonnie and Selix reconcile the past before they are caught by those who seek to drag them home in chains?

The sequel, Holy Avenger was released in 2017.