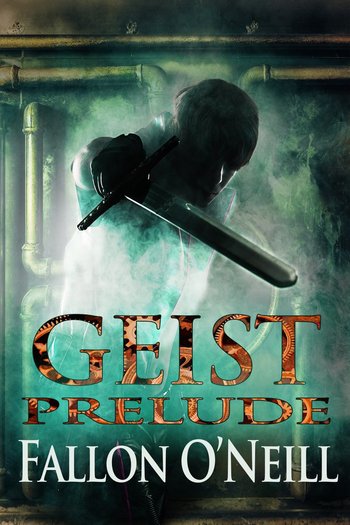 "As with all such stories, it began with a nightmare."
"Welcome to your innermost world...."
— The Impresario
Advertisement:

Geist is an ongoing series of Dark/Urban Fantasy novels by Fallon O’Neill. Written as a Genre Deconstruction of Self-Insert Fic, the premise is basic enough: Victor Roland, a high-functioning autistic, gets thrust into his own dark, gothic world. From there, things take a turn for the weird. Fast.

The first novel, Geist: Prelude, was published in 2018. It kicks off with Victor's arrival in Holy Gothica, an industrial city under a totalitarian theocracy. Here, Ser Hector Thaddeus and his deputy, Walter Leng, investigate the latest in a string of grisly murders, only to be reassigned to arrest an "outsider" spotted near the crime scene. Meanwhile, in the slums, Victor learns of portals in televisions, where daemons lurk in the Inferno, tied to both his descent and the murders. When he discovers that his friends from "reality," Charles Garner and Beatrice Morrison, are trapped in the city as well, Victor resolves to find them, lest they wind up as the Dollmaker's next victims. He doesn't get very far. Following his interrogation, Victor forms a "fellowship" with Thaddeus and Leng, joining them in the hope of finding his friends, and perhaps even a way home.

Released in 2019, Geist: Intermezzo, continues the series with Victor's journey across the Gotland Wastes and his encounters with the Powder Kegs. Meanwhile, a shadow from Thaddeus's past makes a vindictive return. The third novel, Geist: Scherzo, concludes the Murder Mystery and was published in 2021. A fourth novel is currently in the works.

An essential part of Geist is Summon Magic. Taking the image of Silent Movie icons, "geists" are living facets of the human psyche born of self-actualization. Word of God confirms Geist draws heavily from works such as Final Fantasy VII, Persona 4, and Warhammer 40,000. However, it's also meant to criticize Wish-Fulfillment and the stereotypes of Hollywood Autism in equal measure. In fact, the series uses Dante Alighieri as a recurring symbol to highlight the hazy line between fan fiction and literature. Not to be confused with the video game, Geist.