Literature / Pretty When She Dies 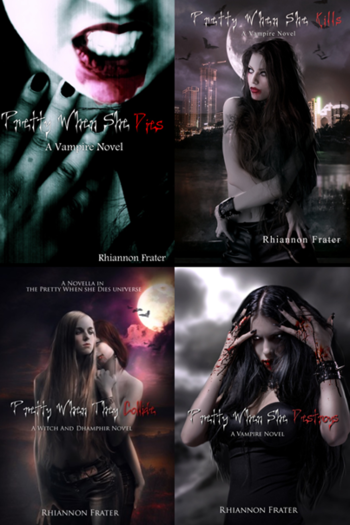 Pretty When She Dies is a Gothic Punk Urban Fantasy vampire series written by Rhiannon Frater. Originally self-published, it has since been picked up and re-released by Permuted Press. It is known for its dark and intense storytelling as well as treating vampires as strongly violent as well as sexual creatures.

Amaliya wakes under the forest floor, disoriented, famished and confused. She digs out of the shallow grave and realizes she is hungry... ... in a new, horrific, unimaginable way... Sating her great hunger, she discovers that she is now a vampire, the bloodthirsty creature of legend. She has no choice but to flee from her old life and travels across Texas. Her new hunger spurs her to leave a wake of death and blood behind her as she struggles with her new nature. All the while, her creator is watching. He is ancient, he is powerful, and what's worse is that he's a necromancer. He has the power to force the dead to do his bidding. Amaliya realizes she is but a pawn in a twisted game, and her only hope for survival is to seek out one of her own kind. But if Amaliya finds another vampire, will it mean her salvation... or her death?

open/close all folders
Pretty When She Dies