Literature / The Games of Supervillainy 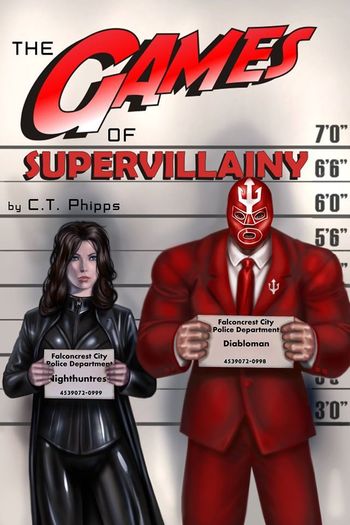 Anti-heroes, anti-villains, and everything in-between.
Advertisement:

The Games of Supervillainy is the second book in The Supervillainy Saga series by C.T. Phipps. The series is published by Crossroad Press.

Get ready for the action-packed follow up to The Rules of Supervillainy. This time with zombies, zombified heroes and villains, cults, magic, superscience, a dragon, a Greek demigod, and so much more!

Gary and Cloak have returned from the supervillain prison on the moon only to discover the city he plans to conquer and rule with an iron fist has been overrun with the living dead. Once again taking up the mantle of Merciless: The Supervillain Without Mercy TM, Gary will have to pull it together quickly, find his wife, his gang, and a whole lot of help to stop the Brotherhood of Infamy from slaughtering the population of Falconcrest City and opening a portal to summon a primal force of destruction.

But Gary has a plan, or at least he's sure he'll have one soon. Just give him a second.