Literature / When We Were Animals 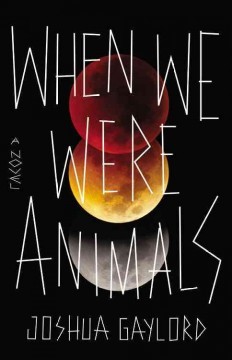 Lumen Ann Fowler has led two lives. Growing up in the town of Poliwakanda, more affectionately known as Pale Miranda, she was little Lumen Fowler: doting daughter, brilliant student; well-mannered and soft-spoken, Lumen kept to herself and stayed out of trouble. Now, as Ann Borden, she is a demure housewife, a loving mother, and though she smiles and attends PTA meetings as expected, beneath that smile is a Dark Secret and a Mysterious Past she has locked away.

You see, the residents of Pale Miranda are a bit different from the rest of the world. When a teenager hits puberty, they begin to breach during the full moon—reverting to savage beasts with ravenous appetites for destruction, unmitigated lust, and an unbridled primal instinct, for one full year. The town allows the teens to run wild, but little Lumen, whose mother never breached, fights it. Desperately hoping to keep her promise to her father, Marcus, she watches as her best friend Polly begins to breach, followed by her childhood crush Peter Meechum, rival Rosebush Lincoln, and the ever-mysterious Blackhat Roy Ruggle, believing herself to be above such animalistic brutality. Until she is thrust into the pull of the moonlight and finally breaches for the first time, and she loses control of the life she had once meticulously strove to keep.

Written by Joshua Gaylord, When We Were Animals is a Coming-of-Age Story with a dash of Gothic Horror released in 2015, nominated for the Shirley Jackson Award for Best Novel.

When We Were Animals provides examples of the following tropes: