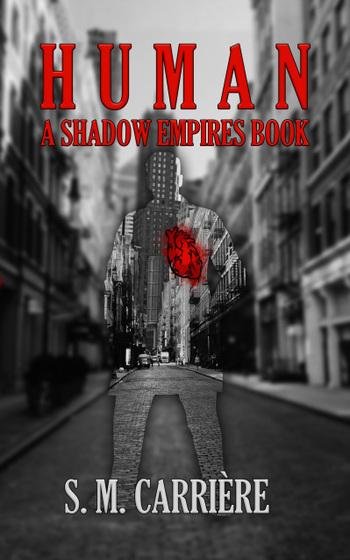 Human Book Cover
Published in 2015 by S.M. Carrière, Human is the first in a series of novels intended to share an urban fantasy setting in which Opyri are ruled by the Shadow Council and generally hide their existence from humanity. The plot is kicked off by an object lesson in why this is the way things are done. After House Ustrel is wiped out by hunters, Aleksander, head of House Svetoslav is sent to the new world, tasked with absorbing their assets and bringing the territories of the annihilated House back into the fold, per the orders of the vampiric Shadow Council. But what dangers await in America, waiting for the Prince of House Svetoslav? Entanglement with the police in the form of Officer Alicia Wilde was certainly not one he'd anticipated.Detective Stephen Brody never expected the evil to whom he'd lost his daughter to return after House Ustrel was destroyed, but now Aleksander Svetoslav, heir-apparent has arrived from Europe to take the reins of the corporate holdings of the House in hand. What dark past is this nightstalker hiding, and what game is he playing? Stephen Brody is determined to find out and expose it. He never expected to have to partner with one of the very monsters he's sworn to stop, in an effort to stop a lurking menace which threatens the entire city.