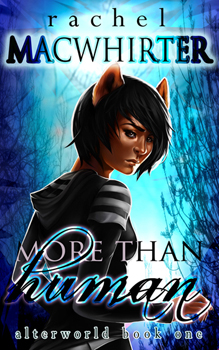 . Currently only the first book, More Than Human, has been released.

More Than Human tells of a fifteen-year-old Emo Teen called Georgia Waratjiry who happens to be a weredingo. While browsing her older sister's internet history, she stumbles across a forum for paranormal folks such as herself. Intrigued, she signs up and unwittingly sets the ball rolling for more involvement with the supernatural community (no, not that one) than she's ever had in her entire life.

She befriends a girl who can fly, her telepath cousin and a ginger gargoyle and ends up heading to the Alterworld, a parallel dimension about which she knows nothing.

One thing leads to another and her best friend gets kidnapped by fairies.