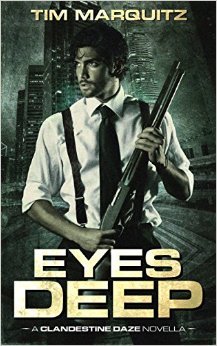 Evil in the name of good is still evil.
Advertisement:

No one trusts a doppelganger, and for good reason. Behind every stolen identity lies murder.

The Clandestine Daze series by Tim Marquitz is set in an Urban Fantasy world where fairy-like race called the Aellisar (called "Aels") live alongside humanity. They have their own nations, politics, and spies. Z is one of those spies, working for an unnamed intelligence service nicknamed A.I. He is a doppleganger, possessed of the ability to assume the identity and memories of anyone.

As long as he eats their eyes.

Forced to assume the identity of an innocent man he's murdered, Z struggles with what little remains of his conscience as he attempts to unravel a complicated series of plots designed to push the Human and Aellisar worlds to war. It may be too late to save his humanity but can he keep himself from becoming a monster?

Advertisement:
The Series So Far
This series contains the following tropes: