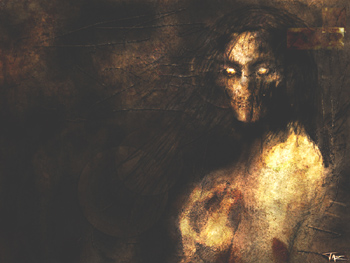 "Make sure to send a lazy man the angel of death."
In the beginning was the Word.
The Word was Light — the Light was Life.
The Gods found them Good and Gold.
Nothing Good and Gold can stay.
— The Book of Old Times, first Stanza
Advertisement:

is a remake of Wraith: The Oblivion set in the New World of Darkness, with some elements of Orpheus and Exalted: The Abyssals, written by J. Edward Tremlett and Chris Jackson and with some illustrations by artists Taz Jurz and Lost Soul. The story behind the game's genesis is explained in its Statement of Intent

. A compendium of the book has been created for download here [1]

Every Wraith is visually and mentally marked by the way they died. Each Death carries its own benefits and flaws:

All Wraiths are cursed with a voice in their head known as the Shadow, a reflection of all the darkest aspects of their personality, or in some cases, the positive aspects taken to cruel extremes. The Shadow exists to indulge itself at the expense of the Wraith in question, but they may prove to be useful allies if one can accept the cost. Shadows are able to manipulate their host by using Thorns, which can produce things like hallucinations or Freudian slips. While every Shadow is unique, they are generally categorized by a personality "type" that follows certain parameters:

In the distant past, when enough Wraiths congregated together, they formed political and philosophical factions known as the Concords, which exist to this day:

Wraiths are not alone in their twilight state. Joining them are the Ferrymen, enigmatic hooded figures that may serve the role of Psychopomps. The Ferrymen rarely speak, save to tell the Wraiths to "have faith." If they are not careful, and wander to the outskirts of the Necropolis, a Wraith may encounter Reapers, armored beings that hunt ghosts for sport and drag them off to some horrible fate. Even worse are the Dark Walkers, vicious killers similar to Ferrymen at a distance, given away by their inability to speak. All of these beings originate from beyond the Barrier, an imaginary wall that separates the land of the living from the Underworld, the "true" afterlife, which virtually no Wraith has ever seen. Those rare few that claim to have traveled beyond and returned are invariably insane, making it impossible to determine the truth of their claims.

Wraiths may learn supernatural powers known as Numina, which allow them to interact with and manipulate the world around them. There are several different kinds of Numina, each with their own purviews. Numina are generally separated into Paths, which each manipulate a different aspect of that Numen.

A character sheet has been made by both MrGone

. Unfortunately, the game was never finished, although it is in a playable state. The project has been retaken by user Faust91x. Hooray! The updated e-book can now be downloaded from [2]