An Urban Fantasy series by Stevie Barry. Quite abruptly, the magic comes back via a fever pandemic. Since almost nobody knew it had ever existed in the first place, this initially goes poorly. 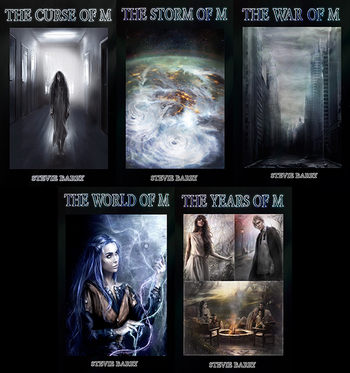 The magic came back. Then the real trouble started.
Advertisement:

Humanity is resilient, however. After a brief wobble that doesn’t quite manage to descend into societal disruption, the world adapts and soldiers on as best it can. The Gifted and the normals reach an occasionally uneasy coexistence that’s bolstered by the fact that the spread of magic didn't end with the fever (bit hard to muster up any effective anti-magical resistance when half the members might well wake up Gifted one morning). The ensuing years bring both struggles and triumphs, as the world tries to figure out the best way to move forward while weathering (literally and metaphorically) the ever-unfolding consequences of humanity’s initial reaction to the return of magic.

Many of them are caused, directly or indirectly, by Doctor Raoul von Rached, one of a relatively small number of people who were born with their abilities long before the fever smacked the globe with a slightly sweaty tsunami of magic. A powerfully telepathic, borderline sociopathic Insufferable Genius, his curiosity and disregard for human life create a decade-long domino effect beyond anything he might have anticipated. (He truly is the gift that keeps on giving.)

Opposing him are humanity in general, and a handful of extremely disgruntled Gifted in particular. The head of their unofficial Anti-Von Rached-Appreciation-Society is Lorna Donovan, an Irish ex-con with more reason than most to want his head on a plate (and that’s really, really saying something). Unfortunately for everyone, he manages to unseal a creature that’s an even greater threat than himself.