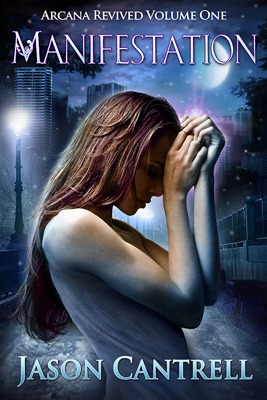 Manifestation is an Urban Fantasy novel by Jason Cantrell. The story is set in a fictional, modern-day world where everything is normal until the day mysterious powers, known as "arcana," begin to return. The main protagonist, Gabby Palladino, finds herself surrounded by danger, mystery, and intrigue when people all around her begin spontaneously developing magical abilities that were once believed to be nothing more than myth and legend. These powers quickly spread out of control, since no one understands where they came from, how they work, or how to stop them from manifesting.

With nothing to guide her but a book of fairy tales known as the Fables of Arcana, Gabby must try to protect herself and her family from the dangers of these uncontrolled abilities, while also trying to discover why magic is suddenly returning to the world after being gone for centuries. Finding the answers isn't easy, since many people don't believe in magic, and they refuse to accept what is happening right before their eyes. Gabby must overcome her doubts and her fears while she searches for answers. Along the way, she also learns secrets about her own self that will change her life forever.

Manifestation is the first book in the Arcana Revived

series, which also includes a short story, "Radiance." The novel was released in September of 2014.