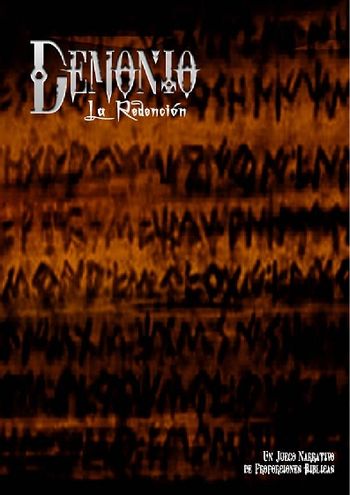 A Storytelling Game of Biblical Proportions

Demon: The Redemption is a Spanish-language fangame for the new World of Darkness, centered around the Nephilim (lit. "Fallen Ones"), angels abandoned by God that have escaped from imprisonment in the Malebolge and possessed human bodies to further their agendas. As the name implies, it is a "reimagining" of Demon: The Fallen. In contrast to its inspiration, however, Redemption is not focused around the Apocalypse, and assumes that demons have been returning to Earth for quite a while. Furthermore, the demons do not (initially) have any memory of events before they came to Earth, which has allowed them to devise many different (and contradictory) explanations for their existence.

Nephilim society rests on two pillars distinct from one another, the House and the Creed.

The House is the birthmark of a devil, and all devils are part of a house. Each has specific characteristics that differentiate it from the others: their role within Creation and their Domains. There are five houses:

The Creed represents the ideology and belief of a devil, especially his vision of Malebolge. Being alien to this existence, the devils formulate theories and explanations for their origin. There are five major faiths:

The location of its Rulebook is, currently, unknown and unfindable.