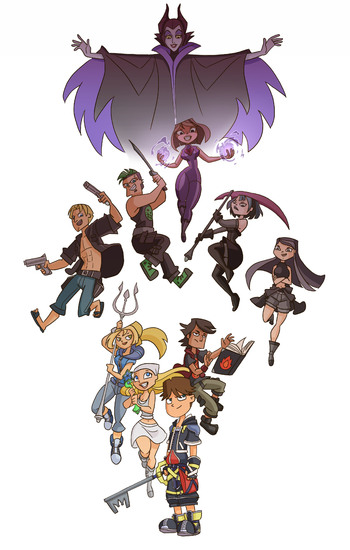 , is a crossover fanfic by TDDolphin

that retells the story of Kingdom Hearts, but with Total Drama characters thrown in.

Taking place after the events of Total Drama Action, Cody and the other contestants are all ready to go home, as their contracts with the show have ended. But while everyone is hanging out at Playa de Losers, a mysterious group of creatures known as the Heartless arrive and destroy their world, separating all the 22 contestants from each other in the process. After managing to get together with Bridgette, Noah, and Lindsay, Cody soon discovers he's been chosen as the new keyblade master to save the remaining worlds from the threat of the Heartless. With the help of his friends, Cody sets off across the multiverse to find his other missing friends and restore their original universe. Along the way, Cody, Bridgette, Lindsay, and Noah make some shocking discoveries of where some of their friends have gone and end up developing some unexpected new relationships with each other.

This Fanfic has the following tropes: