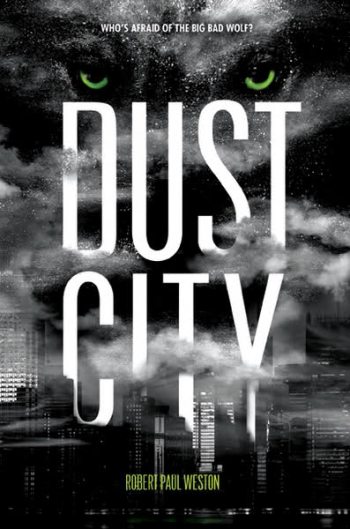 "When your dad is the wolf who killed Little Red Riding Hood life is no fairytale."
— From the back cover

Dust City is a teen Urban Fantasy novel written by Robert Paul Weston set in an Alternate Universe that runs on Grimm's Fairy Tales. It is told from the viewpoint of an anthropomorphic wolf named Henry Whelp, who starts the book in St. Remus, a juvenile detention center mostly for animalia. When he was a cub, all the fairies vanished from Eden, and the richest hominids moved into Eden. By the time of the main story, magic has been ineffectively replaced with "leftover miracles", aka fairy dust. The plot is kicked off when Henry's roommate and best friend, the human thief Jack, steals a file from the visiting psychiatrist's office. It's Henry's father's file, and contains clues to a conspiracy. This is somewhat complicated by the fact that George William Whelp killed Little Red Riding Hood, and in this verse, it ends more or less how it would in Real Life - with a long stay in prison, and his son disowning him. Of course, Jack picks that day to have his elven girlfriend Siobhan bust him out of juvie, taking the file with him. Then the Doc commits suicide, coincidentally right after the file was stolen. Henry uses Doc's funeral as an opportunity to escape, aided by Roy Sarlat's sister, who happened to be visiting her father's grave that day. They part ways, and Henry goes off to Elventown to get the file from Jack. Then the crud really hits the fan.