Film / Mara and the Firebringer 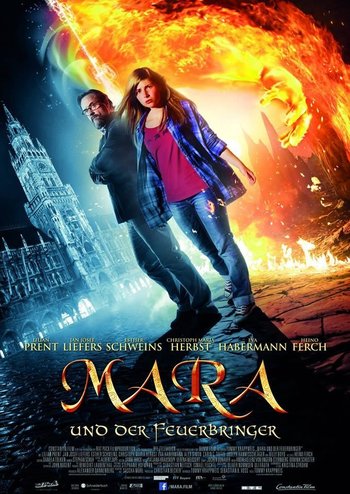 My name is Mara Lorbeer, and I recently learned that I have to save the world.
Advertisement:

Mara and the Firebringer (Mara und der Feuerbringer) is a German movie adapted from the Norse Mythology Urban Fantasy book of the same name, written and directed by the original writer of the novels, Tommy Krappweiss.

Mara Lorbeer (Lilian Prent) is a fifteen-year-old girl who lives with her single Wiccan mother Christa Lorbeer (Esther Schweins) in Munich, Germany. Because of her mother's excentricism, she is relentlessly bullied by the school's Alpha Bitch Larissa (Leonie Tepe) and has no friends. Ever since she was twelve, she's been blacking out and having strange dreams about Vikings attacking her, but everyone dismisses these as daydreams. One day a twig speaks to her, telling her "daydreams" are in fact visions of the future. She is a spákona, a seeress from the Norse myths, and she has to prevent the trickster god Loki (Christoph Maria Herbst) from breaking free from his imprisonment under the Earth or else Ragnarök starts. She finds out that Loki is breaking free out of desperation and rage because his wife, Sigyn (Eva Habermann), has been kidnapped by "The Firebringer", who lusted after her. She meets with the Professor of Norse Mythology from the local university, Reinhold Weissinger (Jan Josef Liefers) and manages to gain his trust after showing him some of her vision. They decide to work together combining his knowledge of the myths with her abilities as a spákona to save Sigyn and prevent Ragnarök.

Not to be confused with The Fire Bringer Trilogy