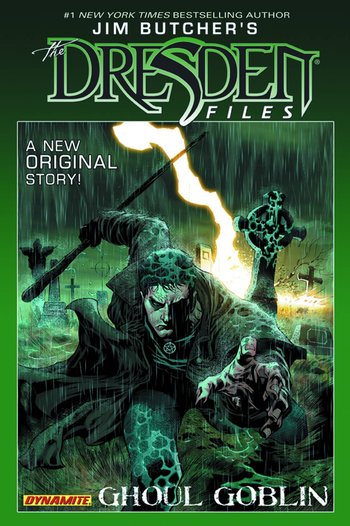 Ghoul Goblin is a six issue The Dresden Files miniseries set in between Fool Moon and Grave Peril.

In 1917, Archibald Talbot, a British officer serving in Cairo, bullied his way past the line outside a cafe and demanded that some people who appeared to be locals leave their table so that he could be served. Two weeks later, he disappeared, and was not seen again until his mummified corpse appeared in the British Museum three years later.

Fast forward to the present, and Harry Dresden, wizard PI, is approached by a police officer from Boone Hill, Missouri. Two siblings, Carl and Sarah Talbot, just died highly suspicious deaths that he believes might be supernaturally related, and Dresden is asked to investigate. After a quick consultation with Bob, Dresden realizes that he has to solve this case fast.

Carl and Sarah weren't the first people in their family to die suspiciously, and they won't be the last. Every descendant of Archibald Talbot has died in an unusual and possibly supernaturally-related way for almost a century. And unless Dresden hurries, Carl and Sarah's five siblings will be next.

Tropes appearing in Ghoul Goblin include: