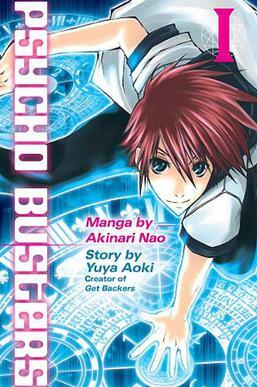 ...That is, until he discovers a beautiful naked girl in his bedroom. The girl — Ayano Fujimura, as she calls herself — is a psychic escaping the Greenhouse, an enigmatic organization who captures such savants like her and experiment on them. Earlier, she and her fellow psychics are forced to jump off a cliff to elude the Farmers, the personal troops of the Greenhouse, but not before their leader, Joi Touma, asking her to find Kakeru himself.

Kakeru is ultimately dragged into the fight together with Ayano and Joi, as well as their other allies — Xiao Long Bai and Kaito Himura — against the Greenhouse as other players behind the scene watch from the shadows. All the while, they must try to unlock the mystery of why Kakeru ties into their fates despite lacking powers though he proves to be far more than meets the eye...

Psycho Busters is a seven-volume manga adaptation of a three-volume light novel series by Tadashi Agi (under the pen name "Yuya Aoki", the same one he used for Get Backers), with art by Akinari Nao.

The manga provides the following tropes: