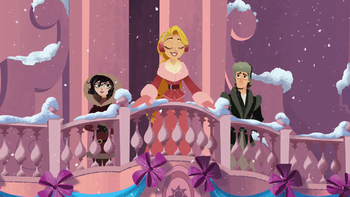 She thinks she’s got this...

...while he tries to make his father proud.
Advertisement:

When her parents go away for two days, Corona is left to Rapunzel, but then she has to contend with a destructive snow blizzard. She hears of a legend that this catastrophic weather has to do with an ancient curse, and could mean the end of Corona. Frederic and Arianna get stuck in the snow storm and are in danger, leaving Eugene to form a search party and save them.

Meanwhile, the black spiked rocks are still multiplying and Varian must find a way to deal with them before they destroy all of Corona, while his father opposes him investigating it further. He reaches out to Rapunzel for help, but this happens at the worst time possible as she has to deal with the decision of whether to evacuate Corona or not.