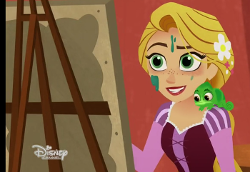 King Frederic has opened a large art gallery on the island of Corona, and commissioned Rapunzel to design a mural for the front of it. Unfortunately the events of the previous episode have caused Rapunzel to question every decision she makes, leading to the painting equivalent of writer's block. A painting teacher who just moved into town offers to help train her, but as the teacher's students begin disappearing Cassandra and Eugene suspect something sinister is about...