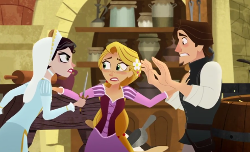 Eventually, they will learn to live with each other's flaws and appreciate their strengths. But that sort of thing takes time. BUT... if you'd like to speed things along... this mood tonic will help.
— Xavier, referring to Rapunzel, Eugene and Cassandra's bickering.

An important negotiation with a neighboring country is coming up, and Rapunzel and friends have been placed in charge of the banquet. But their near-constant bickering has been hindering their efforts and stressing out everyone around them. Xavier convinces Pascal and Maximus to use a mood-altering potion to tone down their friends excesses, but when they accidentally use too much they'll have to find a way to get the three back to normal before the function is completely ruined.