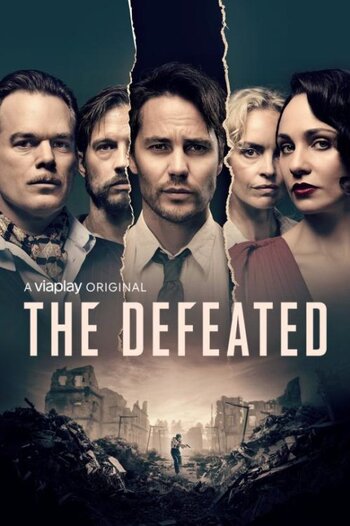 "Me to you, and you to me."
Advertisement:

The Defeated (originally titled Shadowplay) is a series that premiered in 2020, starring Taylor Kitsch, Michael C. Hall, Logan Marshall-Green, Nina Hoss, Tuppence Middleton and Sebastian Koch among others. It is billed as a "Netflix Original" in some countries.

It is set in the summer of 1946. World War II has left Berlin in ruins, the city is under occupation by Americans, British, French and Soviets. Hunger, unemployment, and crime run rampant even as the nominal Allies drift apart and the Cold War is about to start. Into this mess comes Max McLaughlin, a Brooklyn cop who arrives to help train a German civilian police force to try to bring some order to the post war chaos. He not only has to deal with hostile Soviets and a dreaded crime lord known as the Angel Maker, but also with his own quest to find his brother Moritz, who recently disappeared somewhere in the city.