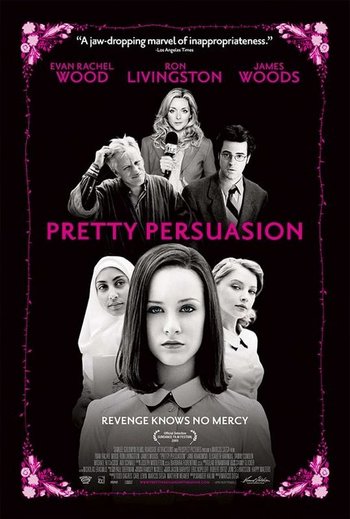 The Devil wears a gray skirt, my friend, and her name is Kimberly Joyce.
"It's like the world is this orchestra and I'm the conductor."
— Kimberly Joyce, pretty much summing up what kind of character she is.
Advertisement:

Kimberly Joyce (Wood) is a precocious 15-year-old who dreams of becoming an actress. Her best friend is Brittany (Harnois), and the two take new student Randa (Schnall) under their wing. They go to the exclusive Roxbury Academy in Beverly Hills, and it's at the same time that Emily (Krakowski), a local news reporter, is filming a fluff piece on the school, that the trio accuse drama teacher Percy Anderson (Livingstone) of sexual harassment. Hilarity Ensues.

The film was noted on its release for proudly taking refuge in both vulgarity and audacity at a level many other films might not have dared to go. Very few of the characters are likeable, and the comedic tone is pitch-black. Think of it as a caustic mix of Heathers and To Die For with Nicole Kidman. Reviews are mixed, and mileages certainly vary as to whether the vulgarity and audacity are pulled off successfully, but most agree that Wood is a standout in the role of Kimberly.