Series / The Secret Life of Us 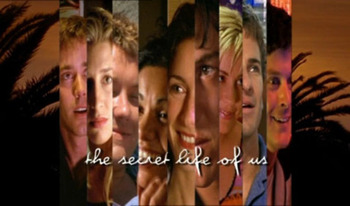 The Secret Life of Us was an Australian drama series, which aired on Network Ten from 2001 to 2005, for 86 episodes (not counting the two-part Clip Show finale) over four seasons. The series revolved around a group of twenty to thirty-something friends living in an apartment block in St. Kilda, Melbourne. The main cast included, at various times, Samuel Johnson as Evan Wylde (the show's main narrator), Deborah Mailman as Kelly Lewis (the show's second narrator, and one of two characters to appear in every episode), David Treddinick as Simon Trader (also appears in (or at least is credited for) every episode, despite not living in the block), Claudia Karvan as Dr. Alex Christiansen, Abi Tucker as Miranda Lang, Joel Edgerton as Will McGill, Anna Torv as Nikki Martel, and Stephen Curry as Stuart Woodcock.