Literature / The Book of Joan 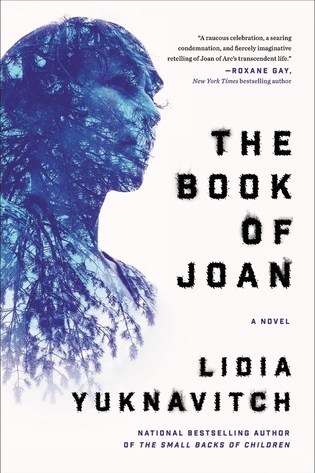 "What if, for once in history, a woman's story could be untethered from what we need it to be in order to feel better about ourselves?"
Advertisement:

The Book of Joan is a poetic, philosophical dystopian novel by acclaimed author Lidia Yuknavitch, published in 2017. It was a National Bestseller and a New York Times Notable Book of the year.

In the near future, the Earth is a barren battleground, ravaged by global warfare, and what is left of humanity has fled to CIEL, an orbiting satellite controlled by the totalitarian leader Jean de Men. Life among the stars has not proved to be the heavenly ascension that was promised, however, and isolated from the Earth's energy, evolution has inverted itself on humanity, who have become colorless, sexless, nearly lifeless shells, inscribing scar-pattern stories onto their skin.

But years ago, before the ascension, there was a girl. This girl became a warrior, and the warrior became a woman, and the woman became the final beacon of hope to a desperate resistance, and her name was Joan. Joan of Dirt, as the enemy called her. She was captured, of course, branded an eco-terrorist and publicly executed by the arcane method of burning at the stake, and with her, it was thought, died her story. But now Christine, a scholar and dissident artist nearing her fiftieth birthday—the limit of life for CIELers—has a song stuck in her head. And that song is only the beginning.

The Book of Joan transforms the dystopia genre, reimagining the Joan of Arc story and the story of life everywhere in a paradigm undefined by masculine-dominated narratives. It asks, what if we are not creatures of light and air, driven ever upwards by our manifest destinies? What if, instead, we are matter—by and of the Earth? And what happens when that connection is restored to us?

WARNING: This work contains several Walking Spoilers that spoiler tags are unlikely to save you from.
Advertisement:

These Tropes Are Star-Stuff: