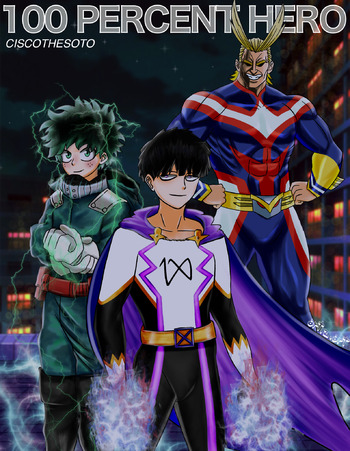 A boy born with all the power he never wanted, Shigeo Kageyama didn't view himself as a hero. Although he saved innocent people from villains and spirits countless times, he never thought about how many lives he saved. But when he goes to a world where people with powers save others regularly, he will come to realize the impact he could have and what it really means to be a hero.
Advertisement:

is an ongoing Mob Psycho 100/My Hero Academia Fusion Fic written by CiscoTheSoto. The premise follows Shigeo Kageyama, the protagonist of MP100 who ends up trapped in a dimension that revolves around heroism after his climactic showdown with Touichirou Suzuki. Under the guidance of Toshinori Yagi, Japan's Number 1 Hero and his new master, and Izuku Midoriya, a hero fanboy and his new best friend, Mob decides to make the most of his situation by becoming a hero himself.

Compare Sure as the Setting Sun which follows a similar premise.