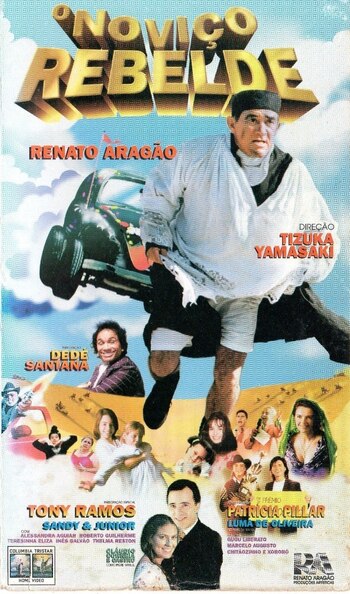 O Noviço Rebelde ("The Rebel Novice") is a 1997 Brazilian comedy film directed by Tizuka Yamasaki. It is the 44th film by the comedy group "The Tramps".

This time, Didi (Renato Aragao) is the sexton of a church in Ceará that ends up being destroyed by a storm. One day, Didi becomes the target of the wrath of Colonel Pereira (Roberto Guilherme), who suspects he knows where his wife Teresa (Luma de Oliveira) has hidden a fortune in gold. With the help of his friend Dedé (Dede Santana), Didi flees to Rio de Janeiro, where he becomes a driver for the children of Felipe (Tony Ramos), a wealthy businessman. Although the children don't like him, Didi soon manages to win the friendship of the whole family. The situation gets complicated when Didi convinces Felipe to give a job to Maria do C&eacute (Patricia Pillar);u, Dedé's sister and with whom Didi is in love. The problem is that Felipe and Maria do Céu fall in love with each other...

The Rebel Novice is a notable film in the Tramps filmography for a few reasons. It is the group's first film made after the resumption of Brazilian cinema (in the 1990s, President Collor had closed Embrafilme, the main Brazilian film distributor, causing only three films to have been released in Brazilian cinemas in 1992). It is also the first film made after Mussum's death, which occurred in 1994 (Zacarias, the fourth member, died in 1990). It is the fourth of the seven Tramps films with the appearance of Roberto Guilherme. And finally, the film features the famous Brazilian musical duo, Sandy & Junior.

This film provides the examples of: