The Characters of Power Rangers S.P.D. 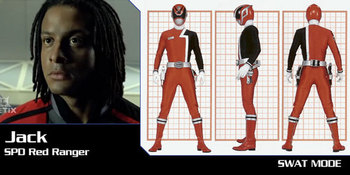 Jack, along with his friend Z, was a thief that stole clothes for the homeless, but when Emperor Gruumm appeared to attack Earth, Commander Cruger approached the two to join SPD. While initially reluctant at first, he eventually joined B-Squad as the Red Ranger and leader. He also has the ability to travel through solid objects.

Promoted to Red Ranger in the season finale, then to Commander of the Earth forces, as revealed in Power Rangers Operation Overdrive 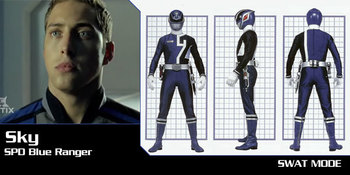 Voiced by: Tsuyoshi Hayashi (Japanese dub)
You think being a Power Ranger is all about roundhouse kicks and being a hero? It's also about hard work and doing what you're told.

Sky trained with Bridge and Syd as part of B-Squad, and always wanted to become the Red Ranger like his late father. However, his rising arrogance caused Crugar to grant him the Blue Ranger powers instead, making him frustrated along with the fact that Jack, a former thief, was named the Red Ranger instead. He also has the ability to create forcefields.

Promoted to Blue Ranger in the season finale, then to Red, as shown in Power Rangers Operation Overdrive. 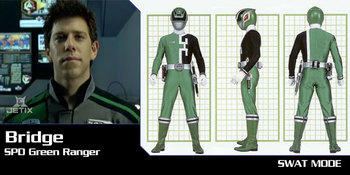 Bridge trained with Sky and Syd as part of B-Squad, and was the analytical of the group, despite his oddness. When Emperor Gruumm attacked Earth, he was given the Green Ranger powers. He also has the ability to ready out people's energy readings. 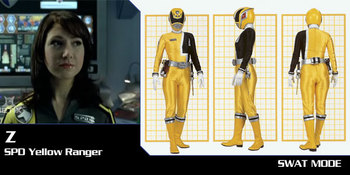 Voiced by: Ayumi Kinoshita (Japanese dub), Kim Mai Guest (Power Rangers: Super Legends)
It kind of gave me that warm and fuzzy feeling inside... that I hate so much.

Z, along with her friend Jack, was a thief that stole clothes for the homeless, but when Emperor Gruumm appeared to attack Earth, Commander Crugar approached the two to join SPD. She immediately took the offer, and joined B-Squad as the Yellow Ranger. She also has the ability to create holograms of herself. 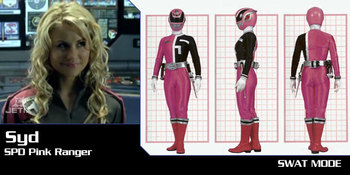 Voiced by: Mika Kikuchi (Japanese dub)
Okay. I'm filthy, cranky, and my new shoes are trashed. Do you really wanna mess with me?

Syd trained with Sky and Bridge as part of B-Squad, and came from a well off family. When Emperor Gruumm attacked Earth, she was given the Pink Ranger powers. He also has the ability to turn her hand into any material she grasps. 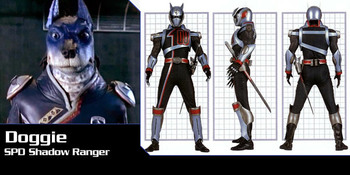 Voiced by: Tetsu Inada (Japanese dub), Darryl Kurylo (Power Rangers: Super Legends)
You have taken what was dearest to me, Benaag - but that has only made me stronger. I am SHADOW RANGER!

Originally from the planet Sirius, Cruger was part of the original SPD when Emperor Gruumm attacked his planet. However, despite their best efforts, he was the lone survivor of Gruumm's attack, and lost his wife, who he believed was killed. Years later, he became the commander of the Earth Branch of SPD, and served as the mentor to both the A and B Squad Rangers. Eventually, he joined the fight as the Shadow Ranger. 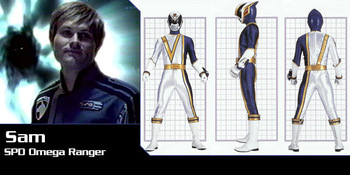 In the present, Sam was a child that could teleport objects to different locations. After being used by Mora and Bugglesworth, he joined SPD as a young recruit. Years later Sam became the Omega Ranger, and traveled back to 2025 to stop Morgana from destroying the Earth. While the time travel caused his body to be trapped in a light sphere when unmorphed, he continues to fight with his friends. 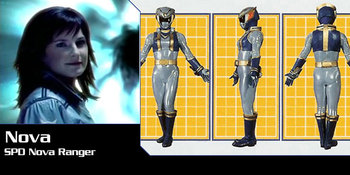 A friend of Sam that traveled back to 2025 when she was worried about him. She traveled just in time for the final fight against Emperor Gruumm. 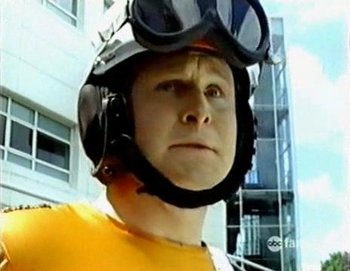 A former SPD cadet who flunked out of the Academy only a few days in and serves as Kat's assistant and Chief Gadget Tester. 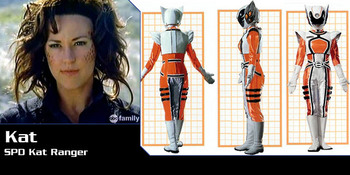 A humanoid cat alien that serves as SPD's head scientist, creating the Ranger powers back in the year 2001. At one point, she became the Kat Ranger after using a morpher provided by Supreme Commander Birdie. 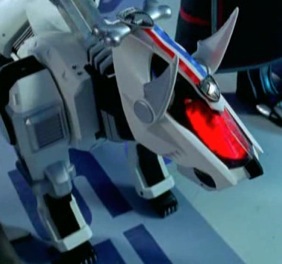 A robotic canine that serves as the Rangers Canine Cannon after being upgraded into R.I.C. 2.0. He later served as Jack's Battlizer armor after another upgrade. 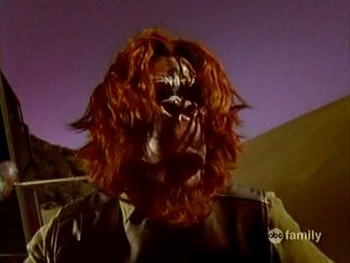 Voiced by: Kanji Suzumori (Japanese dub)
You belong to me! Say it! Say it like your freedom depends on it!

A gorilla like alien, and SPD's drill sergeant who trained the B-Squad rangers in order to access the SWAT Mode. 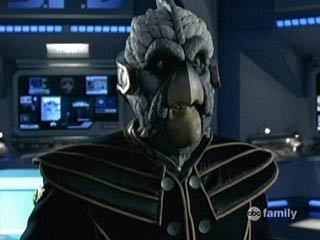 Voiced by: Yutaka Nakano (Japanese dub)
I still think there are certain areas in which S.P.D. could be improved...like, for example, the Supreme Commander staying out of his best commander's business.

The Supreme Commander of SPD, and Cruger's boss. 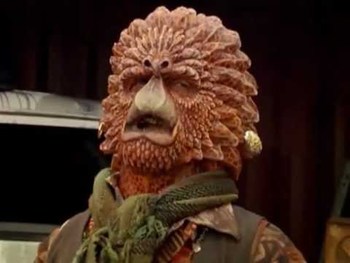 Voiced by: Shintaro Ohata (Japanese dub)
What have I done? I'm a filthy, slime-ridden, low-life, worm-eating vermin! All right, so I was that before I betrayed the Rangers.

A friend of Z's who serves as an informant of SPD. However, he secretly works for Emperor Gruumm and Broodwing. 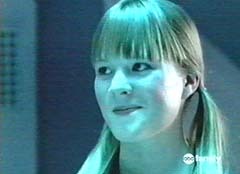 Voiced by: Mark Wright
An intergalactic bounty hunter in search of Hydrax, but was mistaken as a criminal by the Rangers.

Voiced by: Jeremy Birchall
An samurai themed alien landed in Kyoto, Japan many years ago. He is brought to the future through a time portal.
Troobian Empire 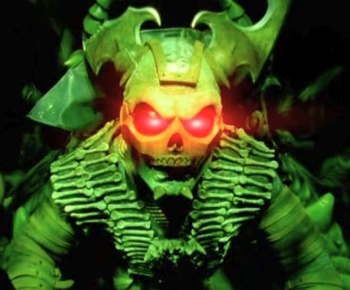 Voiced by: Tetsuo Komura (Japanese dub)
You returned with nothing. Therefore, you shall be nothing. [..] I need another.

The leader of the Troobian Empire whose ultimate goal is to conquer other worlds. He sets Earth as his next target. 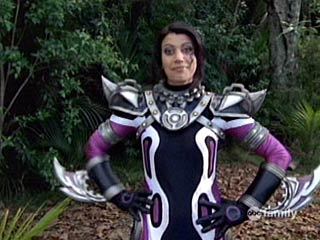 A 10 year old girl who serves as Gruumm's monster creator. Her real form is a young women named Morgana, although she hates being in that age. 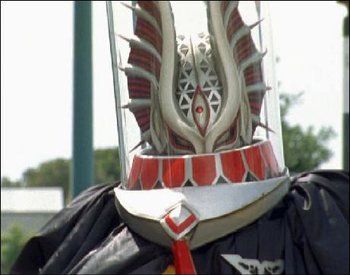 Voiced by: Masami Iwasaki (Japanese dub)
That was not a very clever plan you had, Broodwing. If the Rangers find out about you. It may jeopardize my mission.
Understood your excellence. I'm just trying to make a living.
I do A LOT of business with you, did you show no allegiance? The highest bidder gets your devotion. I should end our relationship now… for your betrayal.
Or you could just pay me more.

A three-eyed vampire bat-like alien who is encased in an artificial environment as demonstrated by the jar on his head. He serves as the Troobian Empire's arms dealer, providing robots and weapons to use. 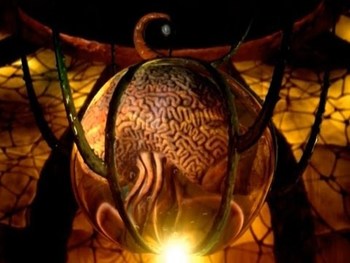 A giant brain housed in a orb tank in a room on Gruumm's spacecraft, and the secret leader of the Troobian Army.

The elite team of Power Rangers SPD had and were the first active squad of Rangers seen when the season began.

Robotic drones that serve as the Troobian Empire's grunt force.

Voiced by: James Gaylyn
Elite versions of both the normal Krybots and the Blue-Head Krybots.
Alien Criminals

Voiced by: Bruce Hopkins
An alien bounty hunter Gruumm hired to take on the B-Squad Rangers.

Voiced by: ??
A minor monster.

Voiced by: ??
A minor monster.

Voiced by: Mark Wright
A rhino-like alien criminal who buys a chemical from Piggy that turns humans into an ooze, which can be used as energy.

Voiced by: Kelson Henderson
A Cthulhu-like monster created from Mora's drawing that tricked Sam to use his teleportation powers for evil.

Portrayed by/Voiced by: Dwayne Cameron
Voiced by: Nobutoshi Canna (Japanese dub)
A Tangar alien that was once friends with Sky back at the SPD academy. However, he secretly defected after meeting Broodwing.

Voiced by: James Coleman
A snake-like alien scientist that escaped from KO-35's satellite prison thanks to Broodwing and Emperor Gruumm.

Voiced by: ??
A balance-themed monster created from Mora's drawing.

Voiced by: James Gaylyn
One of Emperor Gruumm's most powerful generals, and the one that led the attack on Sirius.

Voiced by: Mike Havoc
A Vampiranoid that stole an evil stone to help with his weakness.

Voiced by: Jason Hoyte
A warrior with a reputation for destruction. Mora recruits him in order to gain control of a powerful cyborg named Goradon.

Voiced by: Campbell Cooley
An alien hired hired by Morgana.

Voiced by: Jeremy Birchall
An alien that needs a translator to speak English clearly.

Voiced by: ??
A green-headed criminal that attacked Newtech City with a Robot.

Voiced by: Matthew Sutherland
An alien criminal sent to steal gold at a depository.

Voiced by: Ray Trickett
The second-most wanted alien Morgana hired to help her take over Earth.

Voiced by: Kelson Henderson
The most wanted alien summoned by his younger brother Shorty.

Voiced by: Barnie Duncan
A magician that turned to crime.

Voiced by: Barnie Duncan
The assistant to Mysticon.

Voiced by: Mike Drew
A dangerous criminal with the power to travel through any reflective surface. He was also the criminal that killed Sky's father years ago.

Voiced by: Shane Bosher
A high society alien that turned to crime.

Voiced by: Stephen Brunton
A high society alien that turned to crime.

Voiced by: Glen Drake
A high society alien that turned to crime.

Voiced by: Cameron Rhodes
An old classmate of Kat.

Voiced by: Blair Strang
An alien wanted in ten planets for various crimes.

Voiced by: Stig Eldred
A wanted criminal that took the disguise of Professor Cerebros. He first helped Broodwing bring the Dino Thunder Rangers to the year 2025, and then, he directed a meteor towards Earth.

Voiced by: Patrick Wilson
A pair of ground burrowing monsters Broodwing sent to attack the Rangers.

Voiced by: Jason Hoyte/Wally Wingert (Super Legends)
A former SPD cadet, and a rival to Crugar.

Voiced by: Andrew Laing
A criminal that drains people lifeforce into batteries.

Voiced by: Tom Kane
An unknown alien appears on Gamma Orion when the Rangers receive a distress call.

Voiced by: Robert Mignault
A crab themed criminal, and one of the three criminals that joined Broodwing in the attack at Delta Base.

Voiced by: Edwin Wright
A spiked themed criminal, and one of the three criminals that joined Broodwing in the attack at Delta Base.

Voiced by: Michaela Rooney
A female criminal, and one of the three criminals that joined Broodwing in the attack at Delta Base.

A bird that was dressed in prison-striped garb created from Mora's drawings.

A drill tank piloted by Praxis.

A satellite themed mecha. The pilots included Bugglesworth and Chiaggo.

A ninja-themed mecha. Sinuku and Wootox each used a copy.

A drawer themed mecha used by the Troobian Army.

A drill-based mecha. It was piloted by Green Eyes.

A gladiator themed mecha. The pilots included a Bluehead Kryobot, Invador, and Silverhead.

A horn-based mecha. Mysticon, Delapoo, and Bork each used a copy.

An angel-based mecha piloted by a Blue Head.