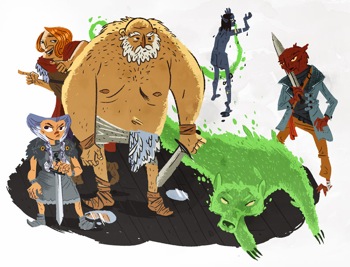 Nerd Poker: Dungeons & Dragons with Brian Posehn & Friends is a comedic roleplaying podcast featuring Brian Posehn and his comedian friends on the Earwolf Podcast Network. The cast consists of five adventurers who were brought together after the hijacking of the pleasure cruise liner known as "The Queen's Laurel" by mysterious beings known as "the Collectors."

As time went on, some new player characters were introduced to replace those that died:

Starting at episode 74, the show started a 'second season' of sorts with a new campaign and characters, and with Blaine as the DM.